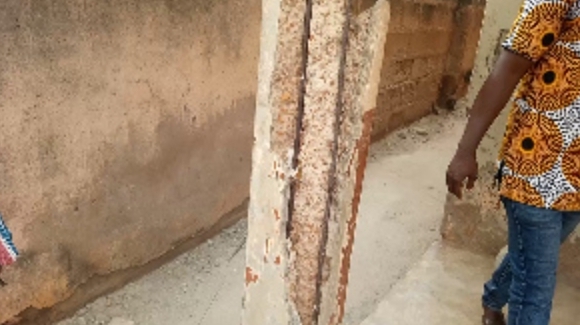 Majority of the basic schools in the Yilo Krobo Municipality in the Eastern Region are contending with an acute shortage of furniture in their respective institutions, the Municipal Public Relations Officer of the Ghana Education Service (GES) has said.

Mr. Solomon Sakitey in an interview said the situation continues to gravely hamper academic work in all of its 107 public basic schools in the Municipality as many of the children have to improvise in various ways during teaching periods to follow instructions.

Pupils and student desks are not the only ones affected, teachers’ desks and cupboards are also a cause for worry.

While three or four pupils are forced to sit on desks meant for two to contain the situation, elsewhere, students are forced to improvise either by sitting on cement blocks or on pieces of wooden boards placed on the same.

Mr Sakitey admitted that the lack of furniture was a big problem in many schools in the Yilo Krobo municipality.

He said though the municipal assembly has promised to address the problem by supplying some furniture to affected schools, the general situation was yet to be addressed.

“Shortage of furniture in schools in Yilo Krobo is an issue that affects many of our schools and it is something that the municipal assembly has given us the assurance that plans are in place to get some for us, as to when, they cannot tell and I’ve also mentioned that some were supplied,” the PRO noted.

The situation reared its ugly head at the Somanya M/A primary school when GhanaWeb visited the school.

With a total population of 127 including 82 boys and 85 girls, the basic school has had to contend with less furniture than needed with two or three students forced to share a desk in most instances.

But aside from the lack of furniture, structural defects are also bare with lots of visible cracks posing danger to students of the Somanya M/A primary school.

“Today, I’m here, saw a lot of problems and challenges that the school is facing. First, when it rains, the water enters the classes which means the iron sheets are bad. The roofing itself is bad and if you see the pillars, it’s something like a death trap. All of the pillars around the school are not good,” said the traditional leader.

But the defects are not the only concerns confronting the school. Lack of adequate desks also pose major concerns to them. According to the Asafoatse, such situations should not be happening today.

“They don’t have any good chairs and tables in the classrooms which I saw myself. It’s very sad,” said the traditional leader wondering how such a situation could occur in this day and age. “I don’t know why in a modern Ghana today, we can find all these things in the Somanya area which I feel that school children are not feeling comfortable in the school.”

Recounting how the management of the school informed him of their plight, the Asafoatse said the situation sometimes disrupted academic work in the school, fearing that it could cause problems for the school.”

He said, “I remember the headmaster once called me and I came here and saw the problems they’re facing and when sometimes it rains, they have to close the children to go home because the standard of the school is very bad and anything can happen from even now that I am speaking.”

Appealing for “help and aid,” he called on all stakeholders to come to the aid of the school by addressing the problems confronting it. “Anybody that will come to our aid and feel sympathy for us, we are really begging them to come and help.”