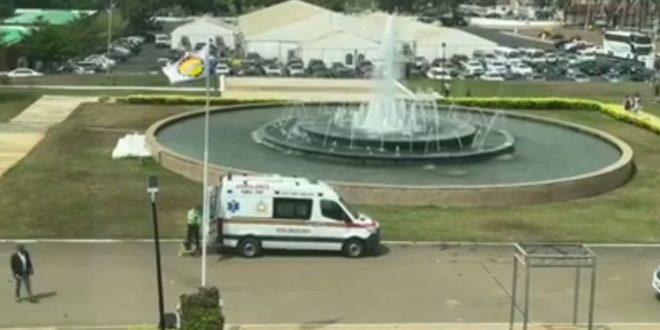 VIDEO: Presence of ambulance raises suspicion of bedridden MP being brought to parliament for E-Levy vote

There are suspicions that the Member of Parliament for Ahanta West, Ebenezer Kojo, has been conveyed to parliament as the house considers the controversial E-Levy today.

This suspicion is as a result of the arrival of an ambulance in parliament.

The scene that was captured on video shows a paramedic ready a wheel chair at the entrance of the ambulance.

Though the video is not long enough to show anyone being brought out of the ambulance, some persons have taken to social media to reveal that the Ahanta West MP who has been bedridden for months was the person on board.

Award winning journalis, Serwaa Amihere and NDC Communication Member, Dzifa Gunu have both shared the video and sought to corroborate the presence of the MP.

“Gravely ill Chieftaincy minister and Ahanta West MP Alexander Kojo-Kum ferried to parliament in an ambulance to assist in passing of E-Levy,” the journalist posted.

Described by some family members as “critically sick,” the MP, who also doubles as the Minister for Chieftaincy and Religious Affairs, has been missing from parliament for several months.

GhanaWeb will bring its readers update on this issue as it unfolds.

With fierce resistance from the minority side of the house and the almost equal number of members on both sides of the house, an ambulance that pulled up at the forecourt of the house ahead of the commencement of sitting caused a stir.

Meanwhile, a leading member of the opposition National Democratic Congress, Felix Ofosu-Kwakye, has affirmed that the minority side of the house is resolved on opposing the E-Levy.

While noting the government’s resolve to pass the E-Levy at all costs, the NDC member in a Facebook post said, “The NPP is determined to use every trick in the book today to pass the E-Levy. NDC MPs on behalf of Ghanaians will do everything to prevent that.”

“Surely the NPP do not intend to drag the ailing Chieftaincy Minister to Parliament against all reason and decency to vote in favour of the e-Levy, do they? Which family would allow their loved one to be subjected to this kind of humiliation in a such a state?”

Previous What is trending today?
Next See what is happening at Aflao border