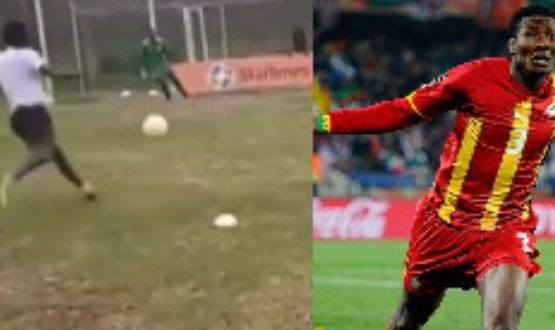 It seems that Asamoah Gyan is not retiring from the game anytime soon as he has begun intensive training with the aim to return to active football.

The former Black Stars captain has not been in action since parting ways with Ghana Premier League side Legon Cities in 2021 after a year in the domestic league.

Asamoah Gyan signed for Legon Cities on a one-year deal ahead of the 2020/2021 Ghana Premier League season but spent most of the time on the sidelines due to recurring injuries.

The former Sunderland striker featured just five times for the Royals out of the thirty-four Ghana Premier League games and was never on the scoresheet nor provided an assist.

But he wants back in the game after telling the world that he hasn’t retired yet on SuperSports when speaking on the TV channel as a pundit during the 2021 Africa Cup of Nations.

And true to his words, Gyan has begun personal training like he said he would in his bid to return to the pitch and start playing football again.

Watch the video below as Asamoah Gyan prepares to get back in the game: