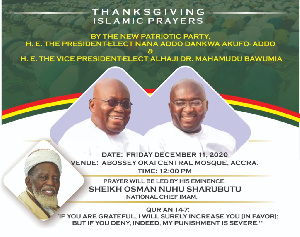 The event is scheduled to take place at the Central Mosque in Abossey Okai, Accra.

A flyer of the event sighted by GhanaWeb indicates that the National Chief Imam, Sheikh Osman Nuhu Sharubutu, will lead the thanksgiving prayers after Friday congregational prayers at the Central Mosque.

The NPP will hold a Christian thanksgiving service on Sunday, December 13, 2020, reports indicate.

The Electoral Commission (EC) has declared incumbent President Nana Addo Dankwa Akufo-Addo winner of the presidential election on Wednesday, stating that the incumbent President won with 6,730,587 votes, which represents 51.302 per cent of the total valid votes cast.

Former President and flagbearer of the National Democratic Congress (NDC), Mr John Dramani Mahama, according to the EC, obtained 6,213,182 votes, representing 47.359 per cent.

However, the NDC has contested the results, alleging that the EC stole the elections for the NPP.