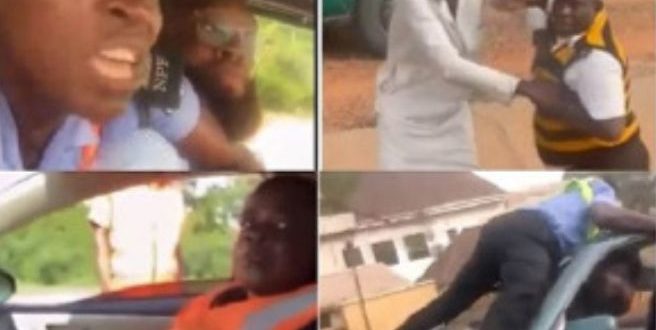 Share
Recently, there have been a trend of police officers caught on tape in uncomfortable situations.

The videos which have surfaced online showed some police officers in the cars of civilians who thought they were been harassed by the law enforcers.

The policemen, women and the State Traffic Management Authority (LASTMA) officials were seen in uncomfortable situation hence their cry for assistance from people around them.

A policeman in uniform was recorded in a video hanging on a car bonnet as the man drove on high speed.

Another video showed a LASTMA official falling off a moving truck and landing on his back after failing to get a bribe as the driver refused to stop the vehicle.

A traffic police officer was also recorded pleading and calling on “Jesus” after allegedly entering the car of a drifter who did not commit any offense.

One policeman was seen struggling with a driver over his keys as he called out to his colleagues for help.

The most recent is a police woman who was seen on tape crying for help as a driver she arrested drove her to an unknown destination.

Below are videos of police officers who have been recorded calling for help.