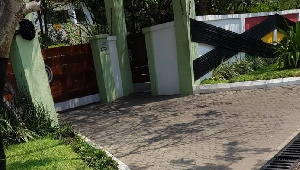 Rumours were rife on Monday morning, February 15, 2021, that Ghana’s Finance Minister-designate, Ken Ofori-Atta, had passed on hours of his departure to the United States for treatment over some health complications.

Following up on this rumour, GhanaWeb had visited his residence earlier to ascertain if there was any merit to it. Upon arrival, the news team spotted two men removing a black cloth that was used to decorate the premises. The main gate to his residence was also shut and people were not allowed to enter.

Although the atmosphere looked calm and the police were seen patrolling the area, it could not be confirmed at the time whether or not there was any substance to the death rumours.

According to some passersby who spoke to GhanaWeb in the early hours of the morning, some vehicles were seen trooping in and out of the residence but they could not ascertain what exactly they went in there to do.

Attempts to speak to some persons who were believed to be workers in the house also proved futile.

However, the CEO of the Ghana Chamber of Bulk Oil Distributors made a post on his Facebook page citing Michael Bediako, Special Assistant to the Minister, saying the Minister was safe and sound.

“Ken Ofori-Atta (Finance Minister-designate) has safely landed in the US. He is in good spirit and sends his warmest regards to the people of Ghana,” the post said.

Meanwhile, an official statement is yet to be issued by the Finance Ministry and the family to dispute the death rumours and claims.