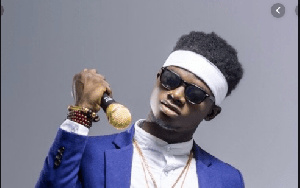 VIDEO: Many people want my downfall – Kuami Eugene cries out

Ghana’s rockstar and reigning VGMA artiste of the year, Kuami Eugene has asserted that many people are predicting his downfall.

In an Instagram live video sighted by sammykaymedia.com, Kuami Eugene revealed that he had to stay awoke late in the night to work hard since many people want his downfall.

The “wish me well” hitmaker indicated that his future and career is in the hands of the Lord, therefore, those who keep saying his music career will take a nosedive when he leaves his record label, Lynx Entertainment, should wait and see what happens in the future.

Kuami Eugene and Guru have both been in the news lately over the latter’s claim of a collaboration that was supposed to happen 3-years ago which did not happen.

The issue has generated a lot of buzz and commentary from entertainment pundits and netizens to the extent that Kuami Eugene’s record label head, Richie came out with a lengthy explanation as to what really happened.