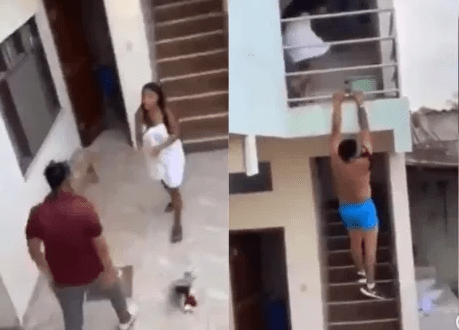 In a video sighted online, a man was seen in a heated argument with his girlfriend after he caught her sleeping with another man.

He came to pay a surprise visit with a bouquet of flowers only to get the shock of his life.

The lady tried to explain that ‘it’s not what he thinks’ but the peeved man refused to understand.

The man who was caught was seen trying to escape from danger as he jumped off from on top of the first floor to the ground to save his life.

When he jumped, he broke his leg but that didn’t stop him from running for his life.

Previous [PHOTOS]: Another Slay Queen dies Just 4 days after visiting a friend’s grave-Full details
Next US 2020 ELECTIONS: Update From All States