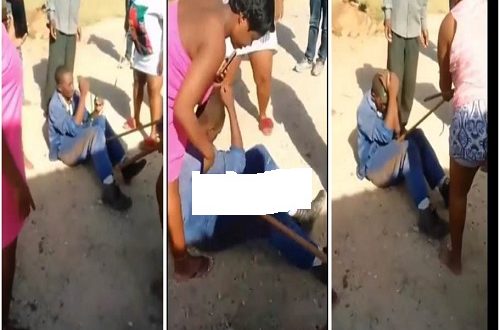 VIDEO: Man beaten ruthlessly after being caught in a hostel stealing ladies underwear

Man was given a beating that he will never forget anytime soon after he was caught red-handed at a hostel stealing ladies underwear.

There was drama and chaos at a ladies hostel as a man was busted stealing their p¶nts.

The unknown man was then treated to mob justice for what he had done. He was first beaten by the ladies then after they had finished with him some men came and demonstrated what mob justice is.

In some cases, the [email protected] are used to have spiritual s.€.x with the victim.

It is not a good thing at all to do or to be done at you. This is why the ladies and the men were so angry with the whole issue.

Check the video as he was given a beating of his life.