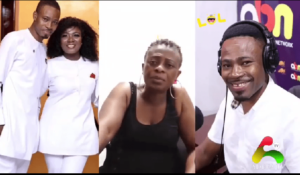 Renowned Tv and radio broadcaster, Kofi Adoma Nwanwani in trouble after tagging NPP MPs in a murder case he was reporting on live radio.

Kofi Adoma yesterday, January 15, 2020 while reporting a murder case of a Ghanaian pastor who killed his 9-year-old daughter for ritual purposes tagged the NPP MPs in the process.

The broadcaster describing the attire worn by the pastor and his daughter in a photo compared them to that of NPP MPs when they all wore white to the Parliament House during the presidential inauguration which did not go well with some members of the party.

Some members of the NPP party do not understand why the journalist should compare such incident to their MPs and has raised an alarm for Kofi Adoma to be dealt with.

According to the NPP members, the Angel news presenter should be careful in his reporting because he (Kofi Adoma) is a murderer. She dared Kofi to publicly come and explain how a lady he took from a village to city died with the intention of helping her to recover from her illness. Kofi has been warned to be very careful when dealing with (NPP) else he will exposed.

Previous Woman, 20, murdered at Gblaka
Next How Agya Koo caused his own downfall – CEO of Miracle Films tells the story