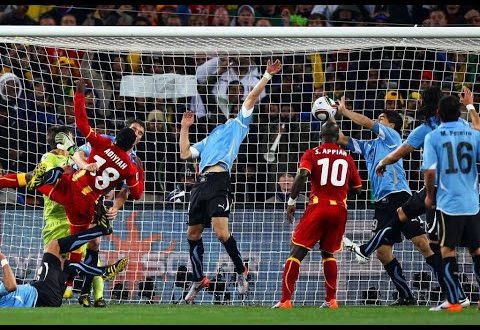 Ghana’s 2010 FIFA World Cup star, Asamoah Gyan has revealed that he nearly punched Luis Suarez for denying the Black Stars an opportunity to play in the semi-finals of the Mundial.

Luis Suarez made himself an Africa’s football enemy after handling Dominic Adiyah’s stoppage-time goal bond header at the Soccer City Stadium in Johannesburg.

Suarez essentially produced a save on the line worthy of a goalkeeper and was shown a straight red card as a result.

Reacting to how he handled the issue with Suarez after the World Cup, Asamoah Gyan stated that he wanted to punch the striker while playing for Sunderland against Liverpool.

“To be honest, I wanted to punch him during my days at Sunderland. We (Sunderland) were playing a home game against Liverpool, so they came to exchange handshakes with us. To be frank, when he came close to me, I wanted to hit him because of the things people said to me but I decided to keep my cool.”

Asked about what he will do to the Uruguay star whenever he meets him again, he said, “Suarez, I will not do anything to him because he did that to save his country. We had the opportunity and blew it away. He had to do something to keep his country in the tournament. I always say if I was in his shoes, I would have done the same to save Ghana. Sometimes people feel is a cheat but he had to do everything to save his country, he sacrificed for his country,” he said in an interview with Peace FM.

The Black Stars were awarded a penalty after the Luis Suarez incident but Asamoah Gyan failed to convert the penalty leading to Ghana’s elimination of penalty shootouts after the extraction.