Home / POLITICS / VIDEO: How Suhuyini raised quorum concerns before walking out of Parliament 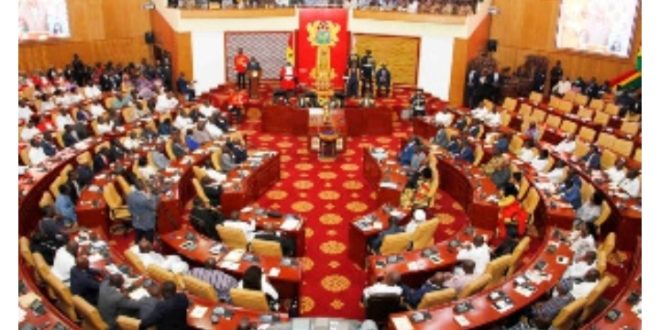 VIDEO: How Suhuyini raised quorum concerns before walking out of Parliament

Share
Parliament on Friday adjourned sitting abruptly over lack of quorum to transact business in the House.

This follows an application made by Mr Alhassan Suhuyini, Member of Parliament (MP) for Tamale North coming under Order 48, who stated that the House lacked the quorum to transact business in the Chamber.

Mr Suhuyini raised the issue of quorum while the Minister for Roads and Highways, Mr Kwasi Amoako-Atta was in the House to respond to a question by Mr Habib Iddrisu, Deputy Majority Whip on the extent of progress on the Tamale interchange and when it would be completed.

The First Deputy Speaker of Parliament, Mr Joseph Osei-Owusu who supervised the proceedings in the House, then asked for the bell to ring for ten minutes after which he would decide on the application.

However, Mr Suhuyini insisted that the First Deputy Speaker must rule on the matter since the provisions of the 1992 Constitution is clear and does not give any person discretion on the matter.

Mr Osei-Owusu explained that he has already directed the clerk at the table to count and furnished him with the number of MPs present to enable him to take a decision on the issue regarding the quorum.

Mr Suhuyini who was not happy with the whole proceedings got up and walked out of the chamber while some majority MPs hooted at him.

Mr Osei-Owusu explained that the Standing Orders were relaxed at the private business for MPs to ask as many questions as possible to have concerns of their constituents addressed, adding that, “if MPs don’t want that, they would strictly apply the rules this time, which is one hour for question time.”

He subsequently adjourned the House until Tuesday, March 15 at 10 in the forenoon.