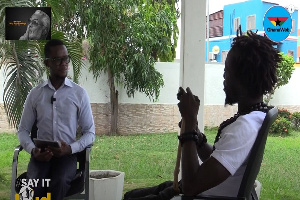 Alexander Wiredu, a former prisoner at the Sunyani Central Prison has added his voice to conversations about the practice of homosexuality in Ghana’s reformation centres.

According to him, though perpetrators of such acts make relentless attempts to shroud their such sexual acts in utmost secrecy, there is nothing like privacy in the prison yards.

Speaking specifically to his experiences at the Sunyani Central Prison, Alexander Wiredu said he was witness to cases of homosexuality on countless occasions.

He said persons who engage in such sexual acts have been in prison for several years and have very little hope of being integrated back into the society.

But he added there were others who were cajoled into the act because they were unable to withstand the tough conditions in the yard. In such cases, Wiredu added, such inmates enjoyed the full benefits of their supposed partners who have served longer years.

“I did not ever take part but people who take part are those who have been in the house for very long years and so when all those ‘dada bees’ and those who cannot cope with the hunger come, they just go to those people because they will let them know they’re the bosses and they can give them better sleeping spaces,” he said.

Adding that “anyone who tells you that it is not, is a very big liar. It even happened when I was there…Early in the morning when we woke up, they started making noise just to let people know that something has gone on, man-man affair. They took those involved to the officers and they confirmed that it happened.”

When asked if any form of punishment was meted out to persons who were ever caught in such sexual scandals, he said, “the officers will give them about 15 lashes and put them in chains from morning to 12 in the evening.”