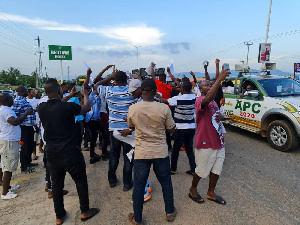 It was all fun and joy when the convoy of the All Peoples Congress led by the party’s presidential candidate, Hassan Ayariga made a primary stop at Koforidua in the Eastern Region while on their campaign tour ahead of the elections.

Supporters of the governing New Patriotic Party had also converged and made a pitch stop at the Bedtime hotel at Koforidua but came out in their numbers as the bus conveying APC members and enthusiasts arrived there.

In a video sighted by GhanaWeb, the supporters of both parties were seen flaunting their party paraphernalia while echoing their campaign slogans and themes.

When the flagbearer of the APC, Hassan Ayariga got out of his car, supporters of the New Patriotic Party were seen mobbing the presidential candidate amidst cheers and taking of photos with him.

Candidates of both All Peoples Congress and the governing New Patriotic Party have begun their tours across the country.