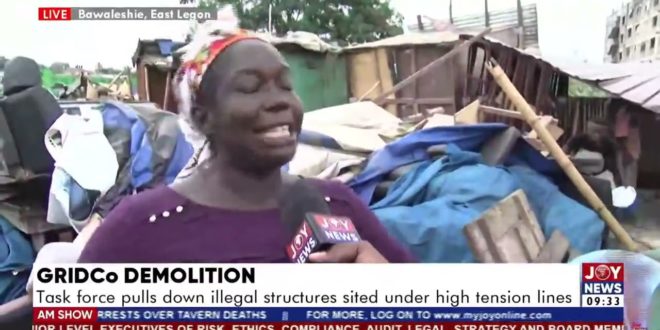 The Ghana Grid Company (GRIDCo) has led a taskforce to demolish illegal structures sited under some of its high tension lines in the Ayawaso West Wuogon municipality.

The move, according to GRIDCo, forms part of efforts to reduce the growing human activities around its poles.

The power generation company also explained that the site is not suitable for human habitation.

Hundreds of the squatters at Bawaleshie rushed to salvage their belongings before they bulldozed by the team.

Speaking to JoyNews, the squatters said they were not given prior notice to the exercise.

Amid tears, many affected individuals pleaded with the task force to give them some time to pack out their things from their makeshift structures.

“It is not all of us that can afford to rent that is why we live in areas like these. So we really need help, government should help us.

“Now that we have been evacuated, where should we go. We can’t go and steal, so government should come in,” a victim pleaded.

Previous Cocoa buyers back Ivory Coast and Ghana’s cocoa premium schemes
Next Burning violence against women in Ghana: ‘Why did you set me on fire?’