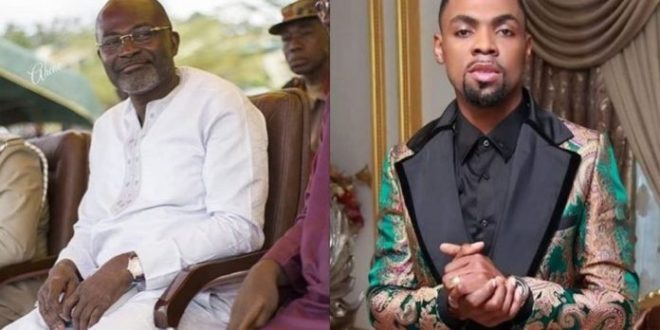 Video: Ghanaians go wild over Obofour’s warning to make Kennedy Agyapong useless if he dares him

Member of Parliament for Assin Central, Kennedy Agyapong, is widely known for his controversial utterances and expose’ in the country but it seems he might be in trouble if he tries exposing Reverend Obofour.

Reverend Obofour, in a video fast circulating on social media, has sent out strong warning to Mr Agyapong never to try his expose’ on him like he did to Bishop Daniel Obinim and many other people, else he will make him useless and ridiculed.

He noted that there is no need fearing anyone and for that matter he fears no one in Ghana but only respects people.

A section of Ghanaians have reacted to the video and some are amazed at the guts reverend Obofour has with some mocking Mr Agyapong because they feel he has bitten more than he can chew.

Read some reactions below:

jackie_afrakomaah_dankwa: U could not even face agradaa na Kennedy am sorry.

kwabena_marcelo: When the gods want to put u to shame.

shidalove1.0: Obinim had back up singer’s too but today they are no where to be found, so stop talking wai cos ken is watching.

kwakuzach:Those around Obofour are opportunists, he should be very vigilant. They will be pampering from beginning, when you fall into trap they will step….. ?