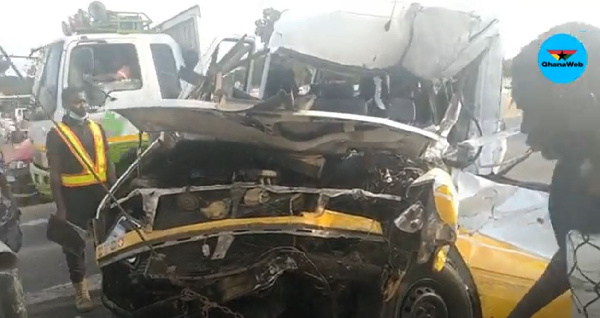 A commercial car driver on Wednesday died on the spot when his vehicle run into a stationary articulator truck at Akweteman, a suburb of Accra.

The White and Yellow Sprinter with registration GR 1051-15 which was full of passengers was reportedly heading to Madina from Kasoa when the accident occurred leaving scores of passengers injured.

According to an eyewitness who spoke to GhanaWeb at the accident scene, the driver of the Sprinter vehicle run into the stationary articulator truck parked on the inner lane.

The driver died instantly when the accident occurred whiles many others on board sustained severe injuries.

Two towing cars were brought in immediately to move the two cars which had caused traffic on the N1 stretch.

Some car dealers in the area told reporters that their complaints about the stationary articulator truck fell on deaf ears when they earlier requested the police to tow the truck away.

At the time of filing this report, one victim had been discharged from the Achimota Hospital whiles others were still receiving treatment.