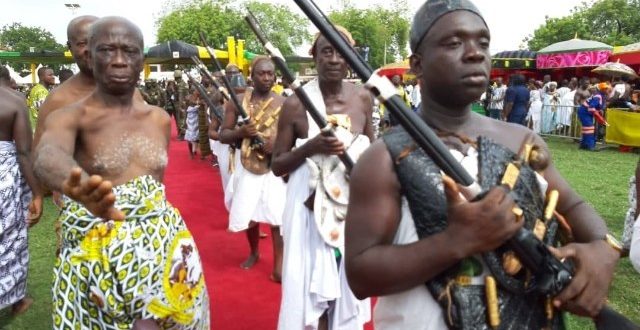 A first year student of the University for Development Studies (UDS) has been killed by a musketeer of the chief of Bomaa in the Tano North Municipality of the Ahafo region, Otempatadwanso Opoku Agyemang MyNewsGh.com reports.

The twenty-one year-old student, whose name has been given as Raymond Kesse was escorting the chief, carrying his footrest to a funeral ground last Saturday when he was hit by a stray live bullet in his left leg, alleged to have been fired from a musket that was being held by another escort.

But the Assemblyman for the Bomkofi Electoral Area who spoke in an interview with Kumasi-based Angel FM monitored by MyNewsGh.com said the chief provided “only rubber bullets” to his musketeers, expressing shock how a live bullet found its way into any of the guns.

He ruled out speculations that the killing was linked to a chieftaincy dispute.

The deceased was immediately rushed to the St. John of God Catholic Hospital at Duayaw Nkwanta, but MyNewsGh.com has confirmed that he died Sunday night.

The deceased who was said to be the nephew of the chief, was to begin his studies at the UDS by the end of this week.

The family is however tight-lipped; townsfolk say they suspect the family wants to cover-up the issue.

The matter has been reported to the Tano North Municipal Police Command, but no arrest had been made at the time of filing this story.