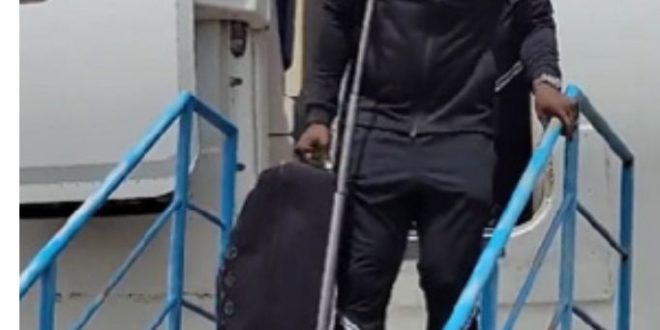 Share
Presidential staffer, Charles Nii Teiko Tagoe, has blamed Nigeria Airlines for the use of an ‘unacceptable’ ramp to exit the Super Eagles from their plane upon arrival in Kumasi, Ghana on Thursday, March 25, 2022.

Nigeria flew to Kumasi with a chartered flight that is than the usual airbus that landed at the national Kumasi Airport. Therefore, the boarding ramp used could not properly fit the exit as the players were made to hop from the exit to the ramp.

While Nigerians bash Ghanaians over unfair treatment, Tieko explained that due to the size of the plane, it was difficult for the operators to get a boarding ramp that will match the aircraft.

He added that Nigerians did not make proper arrangements for the arrival of their aircraft used.

Air Peace should have informed their airline handlers here in Ghana on the type of aircraft the Super Eagles will be arriving with so that together with the Airport Authorities they will be arranged for the required boarding ramp for their aircraft at the Kumasi Airport.”

He concluded by pointing out that, the Nigerian air space needs to be l

blamed instead of the authorities at the Kumasi airport.

“Instead of us blaming the Nigerian carrier, Air Peace, for its failure to communicate properly with its handlers here in Ghana, we are blaming our airport authorities for no wrongdoing. Not only are we quick, but we take so much delight in bringing each other down. The brother against brother and the pull him down attitude in this country is simply amazing and unbelievable.”

Nonetheless, the team have settled at the hotel in Ghana and held their last training at the venue selected for the game, Baba Yara Sports Stadium.