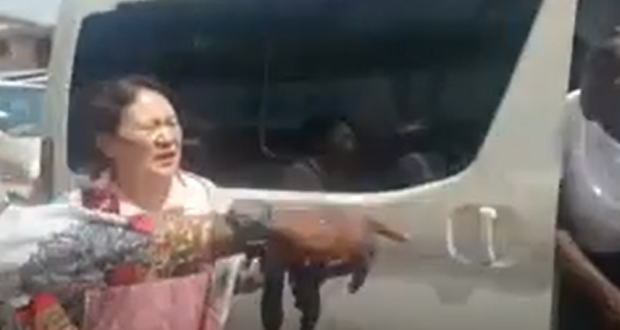 An Asian woman has reportedly been shoot in a daylight robbery at Caprice a suburb of Accra.

A viral video sighted by GhanaWeb showed some pedestrians helping the woman who had been shot get to the nearest hospital.

The victim was bleeding around her left arm.

One of the men who came to her aid, said she had just been shot by armed robbers.

They stopped a commercial vehicle and helped the woman board it, instructing the conductor to take her to the nearest hospital.

The vehicle the woman was driving, a 4×4 Prado, can be seen on the street with part of its windows shattered.

The video also showed the woman in a health facility being taken care of by a doctor who urged her to be calm.

The Ghana Police Service has also said that the victim is in stable condition.

In a post shared on Facebook, the police said that it has commenced an investigation into the robbery incident.

“The Police are pursuing a gang of armed robbers who attacked and shot a woman at Caprice in Accra today, 9th December, 2022.

“Special intelligence and operations teams have been deployed to trace and arrest the suspects involved; we will surely get them arrested to face justice,” parts of the post by the police read

View a view of the scene of the robbery plus the tweet shared by the police below: