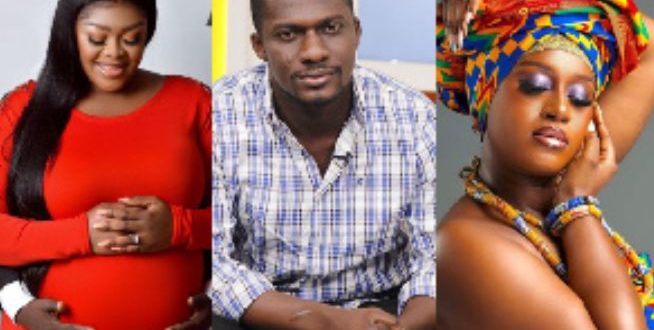 VIDEO: Are you a polygamist? – Baba Sadiq, A-Plus ask Zionfelix

Questions relating to Zionfelix’s “entanglement” with certain women were thrown at him, and he tried his best to dodge them.

The blogger was spotted by the likes of Kwame A Plus and Baba Sadiq at Kwabena Kwabena’s birthday party, where he was asked to give clarity on his current situation after having a baby with each of them (Minalyn and Erica).

“How many wives do you have? Are you a polygamist? Are you a ladies’ man? I can see you supporting your waist with your hands. Does it hurt? Where are your wives?” Baba Sadiq and A Plus took turns asking.

In a bid to dodge the questions, Zionfelix, who pretended as though he wasn’t listening, also asked the men;

“Why are you both not wearing your rings? A Plus, your car is really nice.”

Zionfelix, despite being in a serious relationship with Minalyn, who was carrying his child, also got another woman, Erica, pregnant at the same time.

Erica and Minalyn gave birth during the same period (A baby boy and a baby girl) respectively, and ever since, there has been tension and subtle drama brewing between the two.

Mina and Zion’s relationship has since been a roller coaster journey, saddled with the stormiest of challenges.

Erica, on the other hand, has since been silent throughout the entire development.