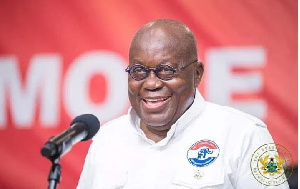 If the statement ‘out of the abundance of the heart, the mouth speaketh’ applies in every case, then there is a special place in Nana Addo Dankwa Akufo-Addo‘s heart for Nii Lante Vanderpuye, the National Democratic Congress (NDC) Parliamentary Candidate for Odododiodio.

So much does he (Nana Akufo-Addo) think about him that at a rally to climax a campaign period that has seen him comb every nook and cranny of the country for votes, he could not resist the urge not to mention his name.

A pretty awkward and perhaps funny moment was witnessed at the NPP’s last rally at Mantse Agbonaa in Accra as President Akufo-Addo introduced the NPP’s parliamentary candidate of the area as Nii Lante Vandepuye instead of Nii Lante Bannerman.

“In Odododiodio, if you are voting for me, then you are also voting for Nii Lante Vanderpuye”, the president said as he held the hand of Nii Lante Bannerman.

Having been notified that he had caused a blunder, President Akufo-Addo quickly mentioned Nii Lante Bannerman. Amid laughter, he apologized and urged the people to pick Bannerman over Vanderpuye.

“I didn’t speak well at all. I have a made mistake. What am I going to do with Nii Lante Vanderpuye. I meant Nii Lante Bannerman and I want you all to vote him”, Nana Akufo-Addo said as the crowd cheered and applauded.

President’s gaffe could be due to the similarity in the names of both candidates.

The only point of departure as far as their names is concerned is the surname (Bannerman and Vanderpuye).

Aside that, the name of Vanderpuye is easily recognized as he is more popular and is one of those NDC’s MPs who have been a thorn in the flesh of the government with their constant criticism.

Some have also attributed the gaffe to fatigue.

The two candidates have dominated the media space as they seek to represent a constituency that has a history of being closely contested and a flashpoint in every election year.

Recently, supporters of the two parties clashed with dozens getting injured and properties being destroyed.