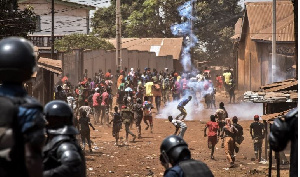 Debris and smouldering garbage marked the aftermath of afternoon clashes between supporters of Cellou Diallo and the Police.

Speaking from his house where he’s barricaded since Monday by security forces, opposition leader Cellou Diallo denounced ‘savage repression’ of his supporters.

“We are going to protest against this electoral hold-up through the street. We are in the process of building a case, which is very difficult since our office is occupied, we don’t have access to our documents, but we are nevertheless going to refer the matter to the constitutional court,” Diallo said.

“In the fight against the third term, we now have more than 130 victims,” he said, referring to people who have been killed in anti-Conde rallies since last October.

“My call to the opposition activists: lay down weapons, be calm and look forward to the future. Nothing is worth destroying Guinea,” remarked Sékou Condé, permanent Secretary of the ruling RPG party.

Dressed in yellow T-shirts, Conde’s supporters held processions to celebrate the 82-year-old’s win in the capital.

“Alpha Condé is everyone’s president. Not the Peul, not the Malinké, not the Guerze (ethnic groups). It is Guinea that is winning. For us, Guinea is one and indivisible,” said Ismaël Bangoura, who is pro-Conde.

A delegation comprising of officials from the United Nations, the African Union and regional bloc ECOWAS was expected in Conakry in the coming days, as efforts to de-escalate the stalemate in the west African country gather pace.