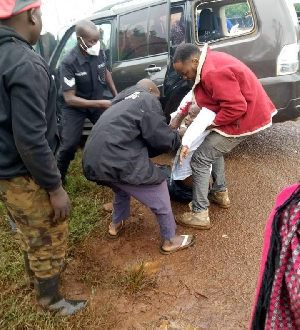 A Ugandan judge was injured in a road accident on Monday morning while travelling to a court in the western part of the country, according to the Uganda Red Cross.

The Daily Monitor newspaper has identified the judge as Paul Gadenya. He was previously the chief registrar of the judiciary.

The newspaper quotes a police spokesperson as saying the cause of the accident is still under investigation.

A hospital official is quoted as saying the judge was in a life-threatening condition and will be air-lifted to the capital, Kampala, for further treatment.

The Uganda Red Cross has tweeted photos of the wreckage of the judge’s car: