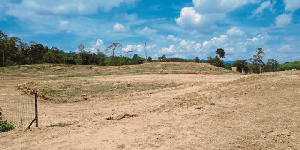 Two royal families today, Tuesday, November 3, 2020, clashed over a piece of land earmarked for construction of a hospital at Ampabame No2 in the Atwima Kwanwoma District of the Ashanti region.

One family, Butuakwaa, says the land belongs to them but were not consulted before it was released for the project.

The other family, Mamsen, which gave out the land to the government for the project also rubbished the claim and said the land does not belong to the acclaimed family.

The two families clashed on the land amidst fisticuffs during communal labour by the community to weed the land for the sod to be cut by the Municipal assembly to start the project.

A member of the Butuakwaa family, Ama Dapaah, told Class News’ regional correspondent Elisha Adarkwah, that they are not against development but since they were not consulted, they will not allow the hospital to be constructed on their land.

But Queen-mother of the community, Nana Abena Gyamfua Amonu said the land does not belong to the aggrieved family and will ensure the hospital project takes place.