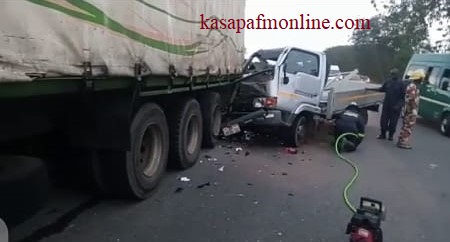 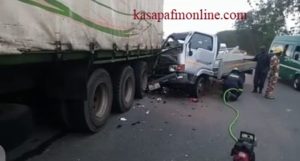 Two people have lost their life including a three-year-old girl in an accident at Gomoa Mpota in the Gomoa West District in the Central Region.

The accident which happened Tuesday morning around 5:30am involved a Kia Truck from Mankessim heading towards Kasoa and a Cargo truck from the opposite direction.

Two occupants of the Kia truck, a woman believed to be in her 50’s, and the 3-year-old girl died instantly and got stuck after the truck rammed into the cargo truck while overtaking another vehicle. The driver sustained an injury.

The driver of the Cargo who was alone in the care also sustained injuries but reported the case at Gomoa Okyereko Police Station.

It took officers of the Ghana National Fire Service from Apam to cut parts of the mangled Kia truck to enable them to retrieve the dead bodies which had been stuck.

The bodies have since been deposited at Apam Mortuary while the two drivers are also receiving treatment at the same Hospital.

The Families of the deceased are yet to be identified.

Police have commenced investigations into the accident.

Previous Man allegedly beats 7-year-old son to death over fish
Next VIDEO: ‘Nana, fix the country, so we can come back home’ — Some Ghanaians ambush Akufo-Addo in Germany