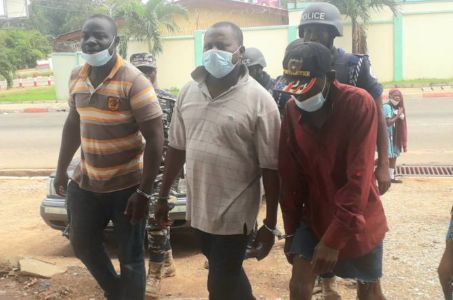 It followed a bail application filed by counsel for Issakar Ibrahim, also known as Anyars and Fuseini Alhassan.

The accused are to satisfy a bail bond of GH70,000 each with two sureties each and landed properties to be justified.

The two known New Patriotic Party Polling Station Executives, and a third accused person, Mohammed Iddi, who is a brother to the late activist, have been on remand over the last 9-months following their arrest in June last year.

Issakar Ibrahim, also known as Anyars, a ticket seller, and Fuseini Alhassan, a butcher, were arrested after some irate youth of Ejura attacked them following the death of social media activist, Kaaka Macho, after 3 days of admission at the Komfo Anokye Hospital.

The death of Kaaka Macho sparked clashes, leading to the killing of two others in Ejura.

The High Court, on Thursday, granted a bail application filed by Tapha Tassah, counsel for the two accused persons who were not present in court.

But, despite the court granting the application, the two are yet to regain their freedom because they are yet to meet the bail bond.

The High Court decision comes at a time family of the late activist expressed frustrations over the delays the case has suffered at the Asokwa District Court.

The case has suffered a series of adjournments, with the latest on March 8, 2022, as accused persons and prosecutors failed to show up in court.

The court subsequently adjourned the hearing to March 22, 2022.

“The family is not taking it easy at all because of the series of adjournments. We have been following the case.

“This case, the 14th time we have been in court; taking into consideration the kind of stress, the kind of psychological problem we have been going through as a result of the loss of a brother and one being arrested,” Mr.  Rabbiu Mohammed, a family spokesperson told Joynews.

Reacting to the latest development, the family of Iddi Mohammed expressed shock over the bail of the two.

The family awaits advice from their lawyers on the next line of action.