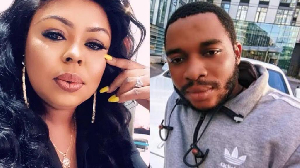 Afia Schwarzenegger has come under fire from Twene Jonas for choosing to elude capture rather than report for her scheduled incarceration.

She is still on the run, though, staying in mysterious places to avoid detection.

Afia’s longtime foe Twene Jonas has at last responded to her current predicament.

According to one of Jonas’ videos, Afia is likely hiding with a man right now and trading her c**chie for protection.

The longer she remained in hiding, the more likely it was that her sentence would be enhanced, so Jonas advised her to come forth and serve her time.

Previous D’banj honored our invitation, we did not arrest him – ICPC
Next Disappointed fans walk-out as Wizkid fails to appear hours after scheduled performance in Ghana, video emerge