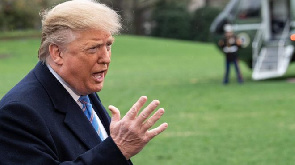 Trump threatens ‘official end of Iran’ if it wants to fight

As tensions escalate between the U.S. and Iran, President Donald Trump warned the Islamic republic on Sunday that a fight would result in its demise.

“If Iran wants to fight, that will be the official end of Iran,” he wrote in an afternoon tweet. “Never threaten the United States again!”

Trump’s statement comes just three days after the president avoided offering concrete answers on the possibility of conflict with Iran, responding with “hope not” when asked by the press whether Washington would go to war with Tehran.

On Wednesday, the U.S. ordered all of its nonessential government personnel to leave Iraq as the Netherlands and Germany both halted their military assistance operations in the nation because of unspecified threats the Trump administration says are linked to Iran.

Though the relocation of diplomatic staffers is typically done during conflict, according to The Associated Press, the reasons behind the White House’s decisions are still largely a mystery.

Over the past week, the U.S. has blamed Iran for allegedly sabotaging oil tankers, and The New York Times reported that acting Defense Secretary Patrick Shanahan presented a revised military plan to possibly deploy 120,000 troops to the Middle East. The updates were reportedly requested by national security adviser John Bolton, who has taken a hawkish stance toward Iran.

The president’s Sunday tweet echoes his all-caps warning delivered last year when he claimed that any threats from Iran would bring about “consequences the likes of which few throughout history have ever suffered before.”

“Be cautious,” he added.

It remains unclear whether the commander in chief would actually send military forces to Iran. According to Reuters, Trump expressed uncertainty over the situation while addressing reporters at the White House last week.

“We’ll see what happens with Iran,” he said. “If they do anything, it will be a very bad mistake.”

If Iran wants to fight, that will be the official end of Iran. Never threaten the United States again!