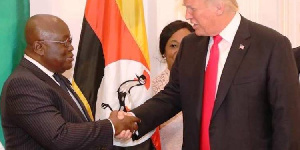 Outgoing US President Donald John Trump has assigned an envoy to attend the inauguration of his counterpart, President Nana Addo Dankwa Akufo-Addo on Thursday, January 7, 2021, in the country’s capital, Accra.

In a statement released by the White House, the United States Special Envoy for the Sahel Region of Africa, Honourable Dr J. Peter Pham, Ambassador, will lead the delegation.

The statement further cited the US Ambassador to Ghana, Honourable Stephanie S. Sullivan to also be part of the delegation.

President Donald Trump’s action comes shortly after his successor, Joe Biden sent an official letter to Ghana’s leader, informing him of his eagerness for the two of them working together to deal with the challenges faced by both countries.

Excerpts of the letter posted on the wall of Communication Director at the Presidency, Eugene Arhin Monday, January 4, read: “Dear President Akufo-Addo, thank you for your kind words and well wishes. I am sorry that we have not yet had the opportunity to connect by phone.

“It is my great honour to have been elected the next President of the United States, and I understand just how much work lies ahead of us.

“Vice President-elect Harris and I will take office at a time of great global challenges – from the coronavirus to climate change – that transcends borders and require international cooperation.”

“We look forward to working with you and your government on addressing the common problems facing our countries and our people.

President-elect Biden further noted that he was hopeful he would meet and dialogue with President Akufo-Addo.

The US President-elect is set to be inaugurated on January 20 as the transition process remains underway.

Previous Angry caller threatens to stab Amerado for touting himself as the best rapper in Ghana
Next LIVESTREAMED: Akufo-Addo’s end of term State of the Nation Address