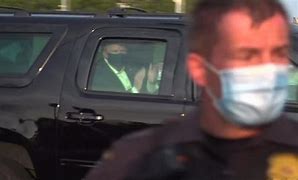 Medical experts are questioning Donald Trump’s decision to greet supporters in a drive-past outside the hospital where he is being treated for Covid-19.

There are concerns the US president, who wore a mask, may have endangered Secret Service staff inside the car.

White House spokesperson Judd Deere said the trip on Sunday had been “cleared by the medical team as safe”.

Questions remain over the seriousness of Mr Trump’s illness after conflicting statements over the weekend.

The president has been in hospital since Friday, after he announced hours earlier he had tested positive for the virus.

Covid-19 has infected nearly 7.4 million and killed nearly 210,000 people across the US, according to Johns Hopkins University.

A growing number of people around the president, including his wife Melania Trump, senior aides and Republican senators, have tested positive with the virus.

What did the president do?

Mr Trump waved to well-wishers from behind the glass of a sealed car after tweeting that he would leave Walter Reed hospital, near Washington, to pay a “surprise visit” to “patriots” outside. Inside the car, at least two people could be seen wearing protective gear in the front seats, with Mr Trump sat in the back with a mask on his face.

Experts say the president’s short car trip broke public health advice to quarantine when seeking treatment for the virus, and may have put Secret Service agents inside the vehicle at risk of infection.

“That Presidential SUV is not only bulletproof, but hermetically sealed against chemical attack. The risk of Covid-19 transmission inside is as high as it gets outside of medical procedures,” tweeted Dr James Philips, a doctor at the same hospital where the president is being treated.

Those inside the president’s car had been at risk of getting ill and would need to quarantine for 14 days, he said.

Democrats have also criticised the trip, with House of Representatives Hakeem Jeffries tweeting: “We need leadership. Not photo ops.”

But the White House’s Judd Deere defended the move, saying “appropriate precautions were taken in the execution of this movement to protect the president and all those supporting it, including PPE [personal protective equipment]”.

Meanwhile, NBC News reports that Melania Trump, who has remained at the White House with mild symptoms, decided against visiting her husband in hospital because of the risks to staff.

“She has Covid,” an unnamed official told NBC on Saturday. “That would expose the agents who would drive her there and the medical staff who would walk her up to him.”

What did we learn at the weekend?

It emerged the president’s condition was more serious than previously reported when he went to hospital on Friday evening.

The White House had said Mr Trump was experiencing “mild symptoms” of Covid-19, but then it was confirmed that he had received extra oxygen after his levels dipped twice in two days.

He was also given the steroid dexamethasone, which is normally reserved for serious cases, according to experts.

, after conflicting accounts from him and the president’s chief of staff, Mark Meadows.

Dr Conley had offered a positive prognosis on Saturday, which was later contradicted by Mr Meadows who said the president’s vital signs the previous 24 hours had been “very concerning”.

“I was trying to reflect an upbeat attitude of the team and the president about the course his illness has had,” Dr Conley told reporters on Sunday. “I didn’t want to give any information that might steer the course of illness in another direction.”

There is scepticism over the prospect – raised by doctors earlier – that Donald Trump could leave hospital as early as Monday.

The president, being 74, a man and someone categorised as obese, is in a higher-risk category for Covid-19. On Friday he was given an experimental drug cocktail injection and started a five-day course of the antiviral medication remdesivir.

However, Mr Trump sought to project an image of strength, tweeting images of himself appearing to work from the hospital and a video message teasing his surprise drive-past on Sunday.

In the video, the president – dressed in a suit jacket and shirt with no tie – said: “I learned a lot about Covid. I learned it by really going to school. This is the real school. This isn’t the let’s read the books school. I get it and I understand it. It’s a very interesting thing, I’ll be letting you know about it.”

What do the drugs say about Trump’s condition?

How significant is it that Donald Trump has been given dexamethasone? The steroid saves lives by calming the immune system, which can become dangerously overactive in Covid, but needs to be used at the right time. Give it too early and the drug could make things worse by impairing the body’s ability to fight off the virus.

This is not a drug you would usually give in the “mild” stage of the disease. The Recovery Trial, which took place in the UK, showed the benefit kicked in at the point people need oxygen – which Mr Trump briefly did. The World Health Organization translated those findings to advise using the steroid in “severe and critical” cases.

Mr Trump’s blood oxygen levels did dip below 94%, which is one of the National Institutes of Health criteria for “severe illness”. However, those low oxygen levels were not sustained and the gap between someone needing transient oxygen support and end-stage Covid-19 is massive.

We do not know the full details of Mr Trump’s condition, but it is hard to imagine you or I would be discharged from hospital while taking dexamethasone and remdesivir and after being given an experimental antibody therapy. However, we do not have the medical support at the US president’s disposal.

Who else around the president has tested positive?

Many of the people who have tested positive around Trump attended a meeting at the White House on 26 September that is being scrutinised as a possible “super-spreader event”.

As well as his wife, they include close aide Hope Hicks – believed to be the first to show symptoms – campaign manager Bill Stepien and former White House counsellor Kellyanne Conway.

Nicholas Luna, the latest person reported to have tested positive, is a personal assistant or “body man” of the president and is in constant contact with Mr Trump.

What about the political situation?

The president’s campaign team said on Saturday it would move forward “at full speed” until Mr Trump could return to the campaign trail. It is calling on top “surrogates”, including Mr Trump’s sons Donald Jr and Eric, and Vice-President Mike Pence to “carry the campaign forward” for the time being.

No White House events are scheduled for Monday.

Joe Biden, who has continued his campaign, is due to make appearances in Miami, Florida on Monday – despite having shared a stage with Mr Trump last Tuesday, when the president may have already contracted the virus. Mr Biden’s campaign said he had tested negative for the virus on Sunday evening.

In an interview to CBS’ Face the Nation, House Speaker Nancy Pelosi, a Democrat, said Republicans in Congress and the president had “for a long time… been anti-science” and that she hoped that Mr Trump’s positive diagnosis would change his attitude towards the virus.

“I pray that in addition to his health, that the president’s heart will be open to the millions of people who have been affected,” she said. “I hope it will be a signal that we really have to do better in preventing the spread of this virus.”