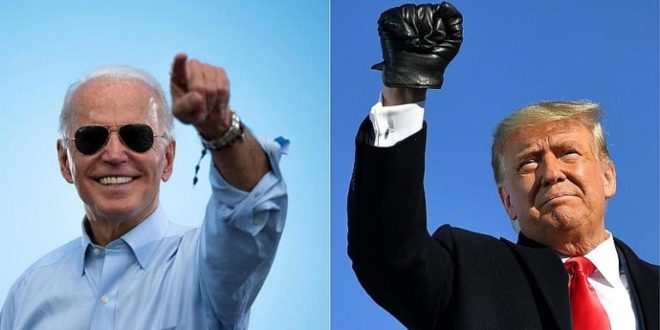 US President Donald Trump and his Democratic challenger Joe Biden are making a final push for votes in key battleground states, which could decide the presidential race. The candidates need 270 electoral votes to secure victory.

With the US Election just two days away, President Donald Trump and Joe Biden are continuing to campaign through potential swing states.

While Biden is expected to win the popular vote according to recent polls, the real election decider is the Electoral College.

The Electoral College is made up of 538 delegates, people who cast the votes that formerly elect the president.

The votes are allocated by population across the 50 states and the District of Columbia, from California with 55 to several states and Washington DC with three each.

A candidate’s electors are on a winner-take-all basis, which means the winner is the candidate that wins 270 or more votes.

Swing states to watch
Here’s what you need to know about the top 10 swing states where residents tend to vacillate in their support between one party and the other.

But polls show that Joe Biden could disrupt Republican electoral power in Georgia, Arizona, North Carolina and Texas this year.

Besides voting for president, millions of American voters will also be choosing members of the country’s 117th Congress. There are 35 Senate seats up for grabs, as are all 435 in the House of Representatives.

Democrats already have control of the House so they will be looking to keep hold of that while also gaining control of the Senate. A majority in both chambers would allow them to block or delay President Trump’s plans if he were to be re-elected.

The US Senate and House races are important because they could determine the balance of power in Washington, DC, for years to come.

Presidential race
For now though, all eyes are on Trump and Biden’s contest on Tuesday 3 November. Tens of millions of Americans have already cast their ballots because of the coronavirus to avoid queuing up on Election Day.

Trump has said – with very little evidence – that this could result in voter fraud.

The president, who visited three battleground states on Sunday, including Michigan, North Carolina and Georgia, said on the campaign that he wants a “smooth, beautiful transition” after Election Day, but he offered an ambiguous follow-up caveat: “But it’s got to be an honest vote.”

The Republican leader has sought to defend his economic record and dangled a promise to get a weary, fearful nation “back to normal”.

His Democratic rival, who on Sunday campaigned in Pennsylvania, has pledged to level with America about tough days ahead, calling Trump out over his mismanagement of the Covid-19 pandemic.

The virus has claimed more than 230,000 lives in the US, which last week suffered record high numbers of cases — hitting 98,000 on Friday.