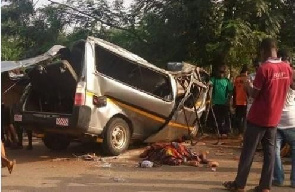 Residents of Abrepo Kesse in Kumasi were greeted with a horrible news of a woman and daughter being killed by a speeding car (Trotro) on Thursday morning.

The mother and daughter were said to be crossing a busy road at Abrepo Kesse on that fateful day when a speeding urvan bus crashed them.

The old lady and her daughter, died instantly and their bodies were seen lying in the middle of the road.

The said incident caused vehicular traffic on the road until the bodies were taken away.

The paper gathered that a lot of people have either been killed or injured through car knock downs on the exact spot where the mother and daughter were killed.

Residents in the community have constantly blamed over speeding drivers as being the major cause of the frequent knock downs in the area.

In the latest incident, some angry looking youth at Abrepo Kesse even decided to lynch the driver and mate of the urvan bus, for being careless.

But the police quickly rushed to the place to save the driver and his mate. Bodies of the deceased have been dumped at the morgue.

Previous Ofosu-Ampofo storms CID HQ with Lithur, Appiah-Opong
Next ‘I stole to take care of my sick child’ – Security man