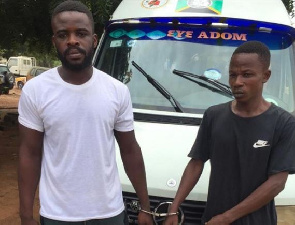 A human rights group is alleging the Police claim it does not know the whereabouts of the commercial bus (trotro) driver and his conductor arrested for allegedly assaulting a police officer in Accra.

According to the Human Rights Advocacy Centre (HRAC), though the Odorkor District Police claims to have transferred the two from their custody to the police headquarters in Accra, officials at the headquarters also denied receiving the accused persons.

The driver, Francis Buabeng, and his mate, Albert Ansah, were arrested last week after they were captured in video exchanging blows with a uniformed police officer at a bus stop around Weija in Accra.

Reports suggest the driver jumped red light and was pursued by the officer on a motorbike to a bus stop where the officer allegedly assaulted the driver who also got down from the mini bus to retaliate in similar manner.

They were arrested and put before the Weija Circuit Court on Monday without legal representation, and remanded into police custody to appear again April 1.

HRAC said Thursday that together with Car Dealers Association and Committed Drivers Association, they visited the Odorkor police station to visit the accused persons and to offer them legal representation in the case.

The group claims “an Investigator at the [Odorkor Police] Station, Officer Jonas, however, informed us that the accused persons had been transferred to the Police Headquarters”.

According to the group, its representatives went to the police headquarters to make enquiries and “were informed that the Police Headquarters did not maintain holding cells for remanded persons, and that the accused persons could not be in their custody”.

“We are by this statement, bringing to the attention of the general public, that we do not know the whereabouts of the two accused persons,” a statement issued by the executive director of HRAC, Cynthia Ampredu-Nimo said.

The Police, officials of the group said, have “failed and refused” to inform them of the whereabouts of the accused persons, despite the fact that they were in the custody of the police as at 18th March when they were arraigned before the Circuit Court in Weija.

The group described the attitude of the police as “an obvious violation” of the accused persons right to legal representation as enshrined in the 1992 constitution.

HRAC is demanding the Police immediately provide it with imformation on the whereabouts of the driver and his mate.

It said it has written to the Police, the IGP “demand immediate access to the accused persons to enable us provide them with legal representation”.