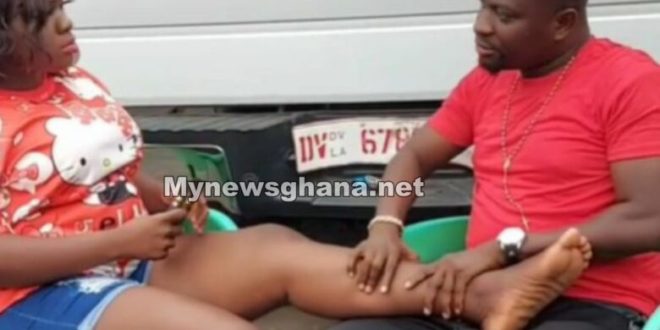 Gospel Musician Brother Sammy who has had quite a number of Scandals tagged to him including having an affair with Kumawood actress and entrepreneur Tracey Boakye who also is known for the “Papa No” incident which caught hold of the whole country.

In a recent news development, a picture of brother Sammy and Tracey Boakye together as Tracey’s legs were seen lying on the gospel musician Brother Sammy has sparked a lot of outrage among netizens who chanced upon the pictures of the two of them together.

Tracey who has little or no shame took to her handle to share the picture of her sitting comfortably as she receives a massage from brother Sammy.

But from the look of the pictures carefully one can see a camera lens showing which might mean the two of them are currently shooting a movie together.

A lot of people have reacted to the pictures and video saying the gospel musician has indeed slept with the actress as many others are also saying its just a way of gaining attention from the people of Ghana so they stay trendy.