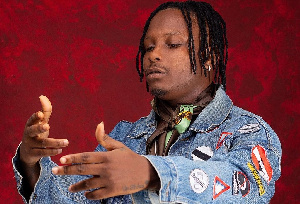 “I will always be grateful for the exposure Stonebwoy gave me but without Stonebwoy, I will survive,” were the words of Kelvynboy in his recent interview with Graphic Showbiz and he seems to have woven these remarks nicely for a record which features M.anifest.

Produced by Samsney and released on Friday, ‘Yawa No Dey’ is a narration of how focused and resolute Kelvynboy is despite the obstacles and relentless efforts by man to see him fall.

Unfazed by the numerous attacks and negative tags, Kelvynboy while asking ‘wetin man no see before?’ highlights how he has triumphed over evil and trials, shaming haters in the process.

“Chale, I be cool, atamfo ani awu. Moaye afere. Yawa no dey,” he sang – to wit, ‘I’m cool, haters have bowed down their heads in shame. I remain strong.’

Known for his exceptional flow and indelible punchlines, M.anifest rapped, ‘Small fly we dey fly wey your man bore’ – a line which some say is also a dig at Stonebwoy as they argue the dancehall artiste was scared of Kelvynboy’s quick growth, for which reason he parted ways with the protégé.

In the wake of the deciphering of the lyrics, Kevynboy intimated in his interview on Zylofon FM that the song was composed based on the “recent happenings” in his career.

I love Kelvinboy but I’m a bit disappointed he’d spend time to release a hate/diss track to his former boss than create clean quality music to promote himself and push Ghana music forward like he always talk about.Songs like this won’t market International #YawaNoDey

Reports of a rift in the BHIM Nation camp were rife in August with many claiming Stonebwoy and his longtime Manager, Blakk Cedi, had severed their working relationship and decided to go their separate ways due to some disagreements over monetary transactions, as well as management and control of the record label and its artistes, Kelyvn Boy and OV.

The said reports were somewhat given credence days later when Stonebwoy and Kelvyn Boy unfollowed each other on social media.

As tongues wagged over what could have sparked the brawl, a statement from Burniton Music Group, of which Stonebwoy is the President, announced that Kelvyn Boy was no longer under the label.

According to the statement, an initial one-year contract the label signed with Kelvyn Boy expired on January 21, 2019, but after an “audit”, it had no intention of renewing it.

“Consequently, the Company has decided to release Kelvyn Boy from the Agreement and he has been duly notified of this decision. Accordingly, Kelvyn Boy ceases to be an artiste under the Company and will no longer be associated with the Company and/or the BHIM Nation brand…,” the statement said.

There were suggestions Stonebwoy took the decision because, among other things, he felt disrespected when Kelvynboy suggested that he [Stonebwoy] is not a dancehall artiste.

Reacting to the claims, Kelvynboy in an interview on Hitz FM opened a can of worms including a claim that Stonebwoy was never proud of him.

“I hear, is my statement about the Afrobeat and dancehall. But I said that confidently because I picked it from him… I thought he stands for that and he’s been saying that for years. Maybe I went straight to the point. Stonebwoy texted me that the way I spoke about the thing, next time, I should watch but I don’t think that’s a reason enough to say I’m ungrateful,’ he said.

“I wish I knew where I went wrong to be labeled ungrateful. I’d want to use this opportunity to apologise to him. I call him; he doesn’t pick… Everybody was [proud of me] except him. He’s never been here to say I’ve done well but he’s been here to say bad things about me. That was the only thing I needed from Stonebwoy – to be proud of me and appreciate me because I served for years. I’ve been backing here and there…”