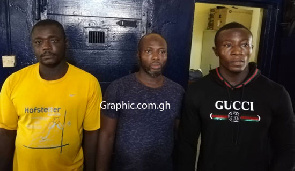 Three out of 12 suspects declared wanted by the police in connection with the killing of Wasiu Iddrisu at the Ashanti Regional office of the opposition National Democratic Congress (NDC) have reported themselves to the police.

The three have subsequently been arrested by the police and are currently in custody assisting in the investigation.

At a press briefing in Kumasi on Friday, the Ashanti Regional Police Public Relations Officer, Assistant Superintendent of Police (ASP), Mr Godwin Ahianyo said the three reported themselves to the police on Thursday, February 28, 2019.

He said the police are still on the lookout for the rest of the suspects.

Another, Abdul Rahman also sustained gunshot wounds and had been rushed to the Komfo Anokye Teaching Hospital.

Previous A total of 20,084 nurses will be recruited this year – Nsiah-Asare
Next 12 foods that will help you survive cold and flu season