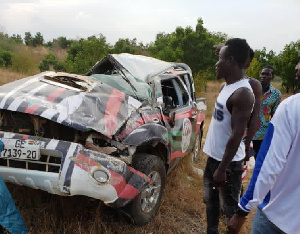 Three executives of the NDC in the Eastern region have been involved in a near-fatal accident while returning from a campaign tour in Afram Plains.

The accident occurred on Saturday, November 28, 2020, on Kwahu Adawso to Kwahu Tafo road.

Information gathered indicate that the executives were returning to meet the national chairman Ofosu Ampofo after campaigning with the General Secretary of the Party Johnson Asiedu Nketia at Afram Plains South and North Constituencies.

The speeding party-branded Nissan Pick-Up vehicle driven by Mr Etornam Nyarko reportedly veered off the road after hitting an unmarked bumpy stretch which made the vehicle somersault five times and landed in a ditch.

The vehicle is badly damaged.

Previous A 50-year-old tavern owner was stabbed to death in KwaZulu-Natal
Next ‘Wo Maame tw3’; Dr. UN fumes as he disses Kumasi based Angel Fm presenter (Video)