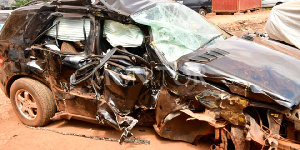 Three people have died after the car they were travelling in was hit by a train at the Level Crossing (railway) in Nakawa Division, Kampala in Uganda on Sunday morning.

One of the deceased has been identified as Norbert Tizikara,32, an Architect with the Uganda Police Construction Unit and the proprietor of Redion Designs. The accident involved a Mercedes Benz ML Reg. No. UBJ 053N and a locomotive.

The ill-fated vehicle is said to have had three people on board when the train knocked and moved it about 70 metres.

Mr. Wilfred Natolie, one of the eyewitnesses said he reached the scene a few moments after the accident had occurred and he was told the victims had been rushed on Boda Bodas to Naguru Hospital for medical attention.

“While driving through Nakawa, I saw an accident involving a Mercedes Benz which had been moved by train for about 70 meters. When I reached the wreckage hoping to get occupants there, I was told by the people around that the occupants had been rushed for first aid,” he said.

He said he found a police patrol vehicle with a dead body of a lady whom they said was one of the occupants of the car.

Mr. Natolie said out of curiosity, he went to Naguru Hospital to try and ascertain the identities of the accident victims but he found only a dead body of a light-skinned lady whom he was informed had died a few minutes before her arrival at the hospital. He was later informed that the driver of the car, Tizikara, also succumbed to the injuries he sustained from the crash.

According to John Linonn Sengendo the Uganda Railways Corporation Communications Spokesperson, the accident occurred at 3:30 am when their locomotive was returning from Namanve after delivering goods to clients.

“According to the train driver, he hooted before reaching the Level Crossing as is always required and also had the headlamps flushing bright for any other motorist to take heed but he suspects that the accident could have resulted from carelessness like most motorists who disrespect Railway Crossings,” he said.