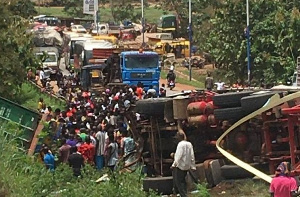 Three drivers are being held in police custody after separate crashes on the Kumasi-Techiman Highway resulted in the death of three people on Saturday.

The accident occurred when the near-side portion of a KIA bus carrying 22 persons grazed a DAF articulated truck killing a 45-year-old man in the process.

He has been named Abdul Rashid, witnesses told Dailymailgh.com.

A police incident report sighted by Dailymailgh.com also confirmed a second crash at the accident scene while the police were managing the traffic situation on the Trans-West African Highway.

It also involved a DAF articulated truck whose 40-footer container it was carrying fell on two bystanders at the accident scene killing them instantly.

Nineteen persons are said to be receiving treatment at the A.M.E. Zion Hospital at Afrancho and the Akomadan Health Center, the police said.

Bodies of the deceased have been deposited at the Nkenkensu Government Hospital morgue for preservation and identification.

The accident vehicles have since been impounded as police begin investigations into the incident.