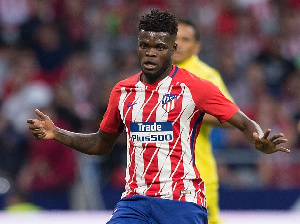 According to Ghanaian sports journalist, Saddick Adams, Thomas Partey will be eyeing a move to Premier League giants Manchester United.

In a tweet, the journalist said he has been furnished with a piece of exclusive news about the potential move of Atletico Madrid and Ghanaian footballer Thomas Partey to Manchester United.

Thomas Partey has had a very great footballing time at the Spanish side with his rating s and values skyrocketing by each sterling performance on and off the pitch.

He has become an integral member of Diego Simeone’s side.

Thomas Partey has been linked to several teams including AS Roma, Inter Milan, Liverpool, Arsenal, and Manchester United.

Although news suggests that Arsenal and very determined to have his signature, the player is set to disclose his interest t don the colors of the red devils and be welcomed amidst cheers and applause to the Theatre of Dreams.

Thomas Partey has since been trending on Twitter. Many Ghanaians are hopeful of a Manchester signing which will definitely bolster the fortunes of the Black Stars.