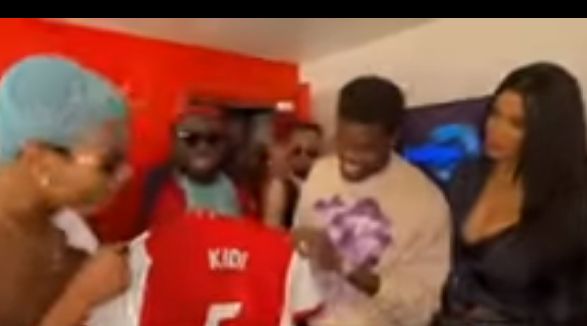 Thomas Partey hangs out with Kuami Eugene, Kidi after Arsenal’s 3-2 victory over Watford

Partey up for Arsenal Player of the Month

Partey was impressive again in the match and managed the most tackles by any Arsenal player in the game.

The 28-year-old continued his fine form for the Gunners in recent weeks with another good display to help them manage four wins from four matches.

Shortly after the game, Partey went at the O2 Arena to show love to Kuami Eugene and KiDi who were performing on the night.

In a video making rounds on social media, Partey, the two musicians and some Nigerian fans of Arsenal enjoyed some brief moments together.

Partey commended the two for filling out the Indigo and entertaining their guests with solid performances.

He also gifted them Arsenal jerseys to show his love and appreciation for their craft.

Kuami Eugene was wowed by the moment, describing it as a big win for Ghana, Nigeria and Africa music.