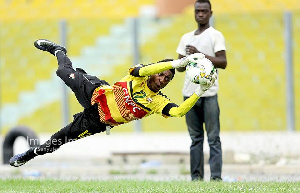 Felix Annan, Captain of Asante Kotoko is saddened and disappointed over the recent injury he sustained during the match-day two-game between Asante Kotoko and Brekum Chelsea at the Golden City Park.

The match which ended in a 1-1 stalemate saw Annan being stretched off in the dying minute of the game.

This has caused the Porcupine’s warrior number shot-stopper to be sidelined for four weeks to ensure full recovery before returning to the field again.

After the Black Stars goalie was relegated to the second position with his club in the last season, he kept his composure and continued training to reclaimed his position, however, the recent injury would cause the goalie to be on the sidelines again.

In an interview with the GNA Sports on Tuesday, he said, the injury was a big blow to him, but, he was focused on recovery to return to the pitch.

The former U-20 goalie said “this is a big blow to me especially picking up an injury at this moment when I am in great shape. But, injuries are part of football and my focus now is my recovery”.

He wished his teammates success and was confident Kotoko will pick all points when they battle FC Nouadhibou in the Confederation of Africa Football (CAF) inter-club competition at the preliminary stage.

The Porcupine Warriors would travel to Mauritania for the first leg scheduled for Friday, November 27, at the Stade de Municipal de Nouadhibou.

Previous Truck attacks: Ramaphosa condemns ‘mindless and bloody lawlessness’
Next Meet The Man Who Has Contested Every Election Since 1992