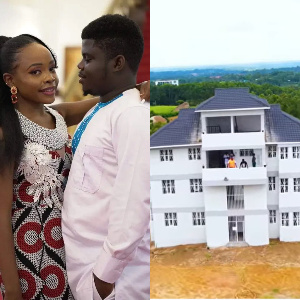 Celebrated Ghanaian YouTuber, Wode Maya, has received a two-bedroom apartment and a one-bedroom unit as gifts after his wedding.

In the video he shared announcing his wedding, one Mr Julius Mwale, the founder of Mwale Medical and Technology City, told Wode, he was gifting him an apartment for coming to Kenya as their in-law.

Wode Maya who after the announcement was captured shocked and in disbelief asked the man, “What do you mean it’s my unit now? Is it for rent or something?”

Mr Mwale responded by saying, “No, you own this now. This is a gift to you for coming to Kenya as an in-law from this community.”

As if the two-bedroom apartment wasn’t enough, his wife also added that she had gotten a one-bedroom unit as a gift as well.

As the video unfolded, the newly-wedded couple mentioned that they had spent only $1000 on their wedding, which is equivalent to 10,000 cedis while the ring among other things was catered for by people they considered family.

According to Wode and Trudy, God sent people their way to make sure they had everything at their disposal.

In the video that was shared on September 13, 2022, the YouTuber disclosed that his marriage ceremony had taken place on September 10, 2022, in Kenya, a day that marked 13 years of the passing of Trudy’s mother.

Introducing the special video that announced his marriage, Wode disclosed that should his children ask him in future “hey dad, what was your 1000th video on YouTube?” he will say “it was the day I got married to your mum.”