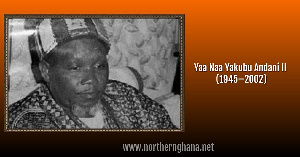 Yaa Naa Yakubu Andani II (1945–2002) was the King of Dagbon, the traditional kingdom of the Dagomba people in northern Ghana, from 31 May 1974 until his assassination on 27 March 2002. He was born in August 1945 in Sagnarigu, a suburb of Tamale in the Northern Region of Ghana. Yakubu II was killed on 27 March 2002 at Yendi, the capital of the Kingdom of Dagbon, by supporters of Abudu royal family when clashes broke out between the two feuding Gates of Dagbon Kingship.

For 600 years the Abudu and Andani clans, named after two sons of the ancient Dagbon king Ya Naa Yakubu I, cordially rotated control of the kingdom centred in Yendi, 530 kilometres (330 mi) north of Accra, the capital of Ghana. As of January 2014, a regent (installed in 2006) has acted as sovereign of the kingdom until a new ruler is chosen to occupy the revered Lion Skins of Yendi.

After three days of unrest and sporadic violence, Gbewaa Palace, the residence of the king together with thirty surrounding houses were burned down. Thirty members of his household and other members of the community were killed and several others injured. The king’s body was dismembered and decapitated after he was killed and set on fire. His head was paraded on a spear and parts of his body were paraded around town. Nobody has been jailed in relation to the incidence (January 2014).

Minister of State, Jake Obekyebi Lamptey, announced his death on March 27, 2002. News of his death and the gruesome manner in which it took place shook the entire country. Dagbon citizens who occupied prominent government positions were inescapably caught up in the dispute.

Some ministers and government appointees resigned under the heat of the dispute. Aliu Mahama, then Vice President of Ghana, vehemently refused to comment on the matter. Death of Yakubu II set a lot of Dagombas against the Government of John Agyekum Kufuor (incumbent 2002), further deepening the common asseveration that Dagombas are more generally sympathetic towards the National Democratic Congress than the New Patriotic Party.

Many Ghanaians accused the government of not supporting Yaa Naa Yakubu II enough and so made his assassination possible. Former President Jerry John Rawlings is at the forefront of such accusations stating that he has evidence to support his claims and wishes to be given the platform to expose the contrivers of the assassinations.

Yaa Naa Yakubu II (1945–2002) was born in August 1945 at Sagnarigu, a suburb of Tamale in present-day Northern Ghana. His father was Andani Mahama, also a previous king of Dagbon who reigned from 1968 to 1969, and his mother was Zenabu Mahama, who hailed from Savelugu. He was named after his Great grandfather, Yaa-Naa Yakubu I(1824–1849). He was his father’s eldest son and the only child of his mother. He attended Yendi primary and middle schools and taught as a pupil teacher for several years.

Before he became Yaa Naa, he had already married three wives; shortly after his inauguration, they were sent to Zohi, a suburb of Yendi, where they were conferred with titles. The first wife obtained the title Gbanzalun, the second wife became Katini, while the third one was given the title Sologu.

By the time of his death in March 2002, Yaa Naa Yakubu II had 26 wives, and each of them was similarly conferred with titles in accordance with Dagomba tradition. He was survived by 103 children including Kampakuya Naa Abdulai Yakubu Andani; his first son and caretaker overlord of Dagbon.

Events of the Massacre at Yendi

The perpetrators are believed to have been an assassination squad of Liberian mercenaries brought to Yendi to incapacitate the Yaa-Naa and his bodyguards, paving way for the local militia of Abudu Gate to finish him off. Eyewitnesses say they numbered around 50 and were armed with sub-machine guns, rifles, and hand grenades.

On the day of the incident, all means of communication to Yendi were hijacked. All thought the seizure of the Gbewaa Palace and attack on Yaa-Naa Yakubu II by the hired assassins and members of Abudu family took several hours to complete amidst firing of heavy artillery, incessant pleas made by the Yaa-Naa to a police station under 2 minutes walk away to come and contain the situation was declined.

Some occupants of the palace who managed escape to the station for protection were turned away by the police. By way of calculated interferences in communication by means of electricity or telephone to the rest of the world, Yaa-Naa was left to his own fate.

It appears the king was designedly cordoned in his palace alongside his eminent chiefs and some members of his family and friends who were with him. He was bombarded with firepower and grenades by the armed assassins till his bodyguards and brave young men in his household who swore to protect him were all taken out.

At that time, the mercenaries having completed their task, disappeared into thin air. His palace and surrounding houses was burned to ruins. That was when the local militia from Abudu Family took over. Yaa-Naa Yakubu II was killed and mutilated alongside some of his elders.

Twenty-two members of Andani Family were brutally murdered whiles others were severely maimed. The king slayers made away with parts of his body including his head they had decapitated. The vicinity was charged with wild jubilations among members of Abudu Gate amid drumming, dancing and singing Dagomba war victory songs.

Famous triumphal rhythm Bangumanga could be head on loud Talking drum from the house of the leader of Abudus, Bolin Lana Mahamadu Abduliai where the severed head of the Yaa-Naa was presented him. Dagomba talking drums are capable of being head across the capital of the kingdom (Yendi) and beyond.

Aftermath of his death

A new ruler of Dagbon cannot be chosen until his predecessor is buried. A pathologist from the 37 Military Hospital confirmed that the body of Yaa-Naa Yakubu II is incomplete; his head, a hand or a foot were detached from the rest of his body. However the severed head and hand of the king were mysteriously returned to the Yendi District Hospital Morgue where the body was kept by an unknown person.

The burial of the king finally took place on Monday 10 April 2006 after a compromise reached between the Andanis and the Abudus concerning his successor. The king was given a state burial in the royal musuleum at the Gbewaa Palace in Yendi. The elder son (Zuu) of the king was enskined as the Regent of Dagbon on 21 April 2006 to manage the affairs of the kingdom until the final funeral rites when a new Yaa-Naa will be enskined.

The traditional title of the Regent is Kampakuya Naa Abdulai Yakubu Andani. His successor is Yaa-Naa Abdulai Yakubu. On 29 May 2011, a court in Accra acquitted and discharged 15 persons who were accused of murdering the Ya-Naa. This sparked violent protests in Dagbon and other parts of the country.

Yakubu II wielded authority over 2 million people aside from the administrative responsibilities the King of Dagbon traditionally has over acephalous groups like the Konkomba, Bimoba, Chekosi, Basaari, Chamba, Waala, Grussi, Zantansi, and others.

Yaa-Naa Yakubu II attempted to improve the literacy rate in the Northern Region, where the majority of citizens could not read or write. Along with Dr. Abubakari Alhassan, he appealed to the Danish government for some support.

The School for Life initiative, now existing all over Northern Ghana began pilot operations in Yendi and Gushegu in 1995. In response to this, the Ghana Danish community, which eventually developed a Non-governmental organisation called School for Life, was established in 1995. School for life designed a free Educational program targeted at out-of-school children between the ages of eight and fourteen.

The program expanded to cover twenty districts in Northern Ghana and has since benefited over 109,000 children (2004) who would otherwise have had no access to education.

Yaa Naa Yakubu II was also instrumental in the establishment of the University for Development Studies in Northern Ghana. Plans to set up a university in northern Ghana had been planned since the regime of General Ignatius Kutu Acheampong (1972–1978), but had never been implemented.

Yakubu II was unrelenting in his efforts to put pressure on the national government to establish the university. He led several protest delegations to Accra to meet leaders of the country. President Jerry John Rawlings, 10th Head of state of Ghana and good friend of Yakubu II finally cut sod for establishment of the university in 1992.

Yakubu II was present at the occasion for that historic moment in Tamale. University for Development Studies now has campuses in Tamale, Nyankpala, Wa and Navrongo. It also has an annual intake of over six-thousand students.

University for Development Studies has campuses in Tamale, Nyankpala, Wa and Navrongo

Between Yendi and Zabzugu, the river Sabali (a tributary of the White Volta) used to flood over its banks, making it difficult for people to transact business at the other side of the river, or transport their farm produce to the market across the river. In 1990, Yaa Naa Yakubu II asked the PNDC government to bridge the river. His request was granted and the river was bridged.

Thus, between 1991 and 1993, he spent considerable time trying to accomplish this. Before he undertook this effort, Yaa Naa Yakubu II was the only paramount chief in the whole of Dagomba traditional area.

The creation of paramount chiefs motivated the Konkombas, who are under the domain of the Yaa-Naa, to request for their own system of paramount chiefs, to be created at Saboba. Initially, Yaa Naa Yakubu II refused to grant them this request, and this was one of the causes of skirmishes between Konkombas and Dagombas, later culminating into the 1994 Konkomba-Nanumba conflict.

The war started at Nakpayili, in the Nanumba traditional area, and spread to the Dagomba and Gonja traditional areas. It claimed two thousand lives, and numerous houses and properties were destroyed. Later, the Yaa Naa gave the Konkomba three paramount chiefs.