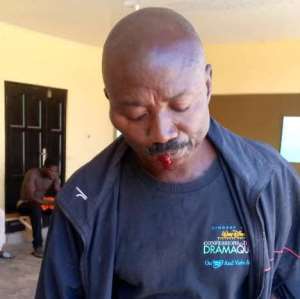 Tension Homabenase as residents in bloody clash with landguards again

The activities of landguards at Homabenase within Bosomtwe District in the Ashanti Region has revealed a number of the some police officers in bed with these landguards against the residents.

Already tension in the area has reached its zenith as the people of Homabenase have vowed to defend and protect their lands. Their anger, according to insiders, was due to similar illegal operations by the landguards about three years ago that led to the death of an elder of the town, a week after he was subjected to torture.

If prompt measures are not put in place to arrest the situation the tension in the area may escalate into something else.

Last week, 21 suspects were arrested by the Ashanti regional anti-robbery unit at the central police command at Homabenase near Donyina Within Bosomtwe District in the Ashanti Region.

The 13 out of the 21 notorious landgurds have been remanded into police custody by the Kwaso Magistrate Court of Ejisu Municipality.

The Prosecution, Chief Inspector, Godwin Amedzo told the Court that the 13 accused persons are on their wanted list for various degrees of crime.

According to him, all efforts to get them arrested proved futile until they were informed by the Ashanti Regional Police Command of their arrest

He further prayed the court to remand the 13 persons to pave way for further investigations.

Court granted the plea and remanded the 13 persons to police custody.