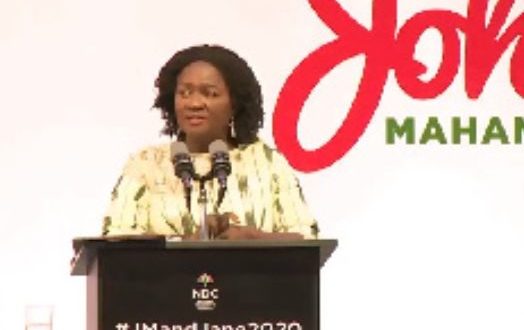 She spoke at UPSA

Prof Naana Jane Opoku-Agyemang, the 2020 running mate of John Dramani Mahama, has said, Ghanaians are waiting for the meaning of the word “review” from the Akufo-Addo led government given that prior to the 2020 elections, they claimed that “review” meant “cancel.”

According to her, it will be good to know how the government would review their flagship social intervention programme, Free Senior High School.

Prior to the 2020 election, President Akufo-Addo urged Ghanaians not to allow the opposition National Democratic Congress (NDC) to “review” its flagship free SHS programme when it comes into office.

The, then NDC flagbearer, John Dramani Mahama had said at a meeting with the Ghana National Council for Private Schools (GNACOPS) that he will “review” the Free-SHS policy within his first 90-days in office if elected in the election.

He cited inadequate consultation with stakeholders in exploring the most effective ways to implement the programme.

But the President in responding to Mahama claimed that, “review” to the opposition meant a cancellation of the programme which had come to help Ghanaians.

After the crunch Peduase cabinet meeting chaired by President Nana Addo Dankwa Akufo-Addo to find solutions to the current economic crisis facing the country, it was reported that, Kojo Oppong-Nkrumah, the Information Minister, had hinted that as part of measures to resolve the economic situation, the government through the Finance Minister will announce a review of all its 16 flagship programmes including free SHS.

Oppong-Nkrumah, has since debunked the reportage claiming that he never mentioned the word “review” in all the interviews he has granted after the retreat on Sunday, March 20, 2022.

Speaking at the launch of TEIN App on Monday, Professor Naana Jane Opoku-Agyemang, could not comprehend why the same people who alleged that John Dramani Mahama‘s use of “review” meant “cancel” would want to do what they once criticised.

“When we said ‘review’ others said we were going to cancel. Today, we are waiting for the definition of review from the ‘Black Dictionary’ since that is the source that they use for many things,” she stated amid cheers from the audience in the auditorium.