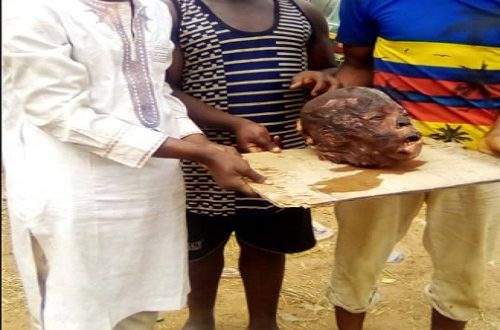 A young man popularly known as Alfa and his accomplices have been arrested after one of them dug into a man’s grave to steal his head for money ritual purposes.

Samson, who got the name Alfa after he completed his Islamic studies, came up with the idea after he was handed a book where a late herbalist wrote down the tricks of his trade.

Waidi Soremi, 25, of 7, Aboaba Street, Itori-Oke in the Ewekoro Local Government Council Area of Ogun State, is the son of the late herbalist. He found his father’s account book after his death and handed it over to Samson, aka Alfa.

Samson Erinle, 25, went through the late herbalist’s book and took special interest on the aspect of money-making ritual he found in the book.

In January, one Taiwo Mesioye, who hailed from the same neighbourhood with them, died and was brought home for burial. Waidi, Samson, and Samson’s cousin, named Taiwo Erinle, 23, all attended the funeral.

After the funeral, armed with the knowledge he got from the herbalist’s book handed to him, Alfa called Waidi and Erinle and told them that it was time for them to wriggle themselves out of poverty. He said that to do that, they will have to get the head of the man who had just been buried.