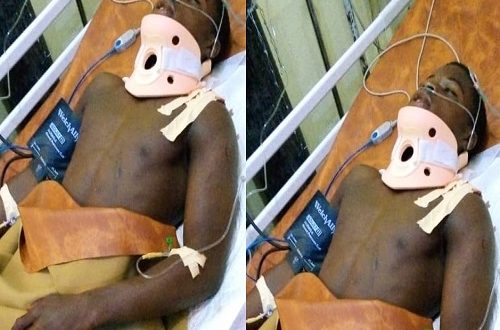 A second-year Senior High School (SHS) student is currently battling for his life after being shot at close range by some armed police officers at Krobo near Techiman in the Bono East Region.

The victim identified as Obeng Emmanuel, 18 is currently on oxygen at the Holy Family Hospital to aid in breathing as he sustained a life-threatening gunshot wound on his chest.

According to the account of the police at about 12:05am on Sunday, they were informed to the effect that some policemen on patrol duty had shot someone at Krobo, a suburb of Techiman, and that the victim was rushed to the Holy Family Hospital.

On receipt of the message, the Deputy Regional Commander, accompanied by the Crime Officer, the Staff Officer, the Highway Patrol Officer immediately proceeded to the hospital to ascertain at first hand the situation.

Upon arrival, the victim, one Emmanuel Obeng age about 18 years was met at the intensive care unit (ICU) being attended to by a medical team.

The team met one Owusu Samuel together with some relatives of the victim who seemed not know exactly what resulted to the shooting.

On return from the hospital, enquiries revealed that Constable Owusu Mensah and Constable Dominic Amankona who were on motorbike patrols were attacked and pelted with stones upon reaching Krobo.

In an attempt to defend themselves and escape, fired warning shot which resulted in victim being hit on the shoulder.

Family of the victim of the are however disputing the claim by the police and are insisting no one pelted stones at the policemen as claimed.

Tags battling FOR HIS life SHOT SHS student WHO