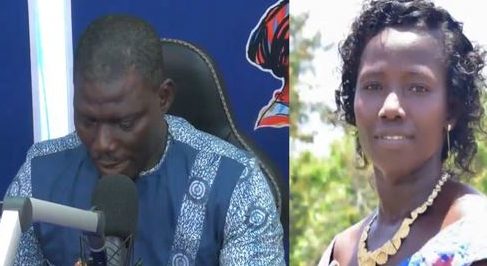 It was a moment of sadness when Pastor’s wife, Emelia confessed to scamming her boyfriend, Evans and dating several men.

Evans who appeared on Oyerepa Afuto, Friday, July 8, 2022, accused Emelia of scamming him.

“I proposed to Emelia, in the course of dating she got pregnant. She decided to abort it but I warned her not to do it.”.  Evans narrated.

According to him, Emelia called and told him she aborted the pregnancy.

“Emelia called to tell me that she has aborted the pregnancy. After 3 years I had a call from her, she told me she didn’t abort the baby so she is bringing her to me.

I accepted and started taking care of her. She sometimes comes to me with the child”. He narrated.

Evans lamented that Emelia always prevented him from visiting them.

“Whenever I called to visit them, she stops me. One day she told me, Methodist church is organizing a program for the children and whoever becomes winner would be sent to the US”.

After some days, Emelia informed me my child has been declared the winner. So I started preparing for the US journey.”

“I called her but a man picked up, he told me Emelia is his wife and he’s the father of my child.” Evans declared.

He further bemoaned that he has spent over GHc60,000 on the child he’s not responsible for.

Subsequently, when Emelia was called on the show she confessed that he’s married and her husband is the father of the child and asked Evans to forgive her.

“Yes… I have been dating him for a long I have wronged him. Help me to apologise to him. My husband is the father of the child, not Evans” She stated in tears.

Evans, therefore, is demanding GHc 60,000 money he spent on the child.